It was so much fun at the Farmers Market this past weekend. It’s that time of year when you start to get a lot of great things there like fresh herbs, green beans, early girl tomatoes and of course cucumbers and zucchini.

I stopped at a stand that offered a deal of $10 per bag, fill it with what you want (and a fairly large bag I might add). Needless to say I loaded up. Since I don’t have the space to grow zucchini anymore I got a couple of them so that I could make my Double Chocolate Zucchini Bread. They had some fabulous fresh green beans and I got some of them as well – great for steaming. They also had some Yukon gold potatoes that I couldn’t resist. And they also had some great looking pickling cucumbers and so I thought I’d try my hand at that.

Pickling is a rather easy process and if you decide not to can for preserving purposes the pickling process is even easier. I really had no idea how many little cucumbers I should get as I wanted to try to fill two pint jars, so I guessed at four and I happened to be right (this time). 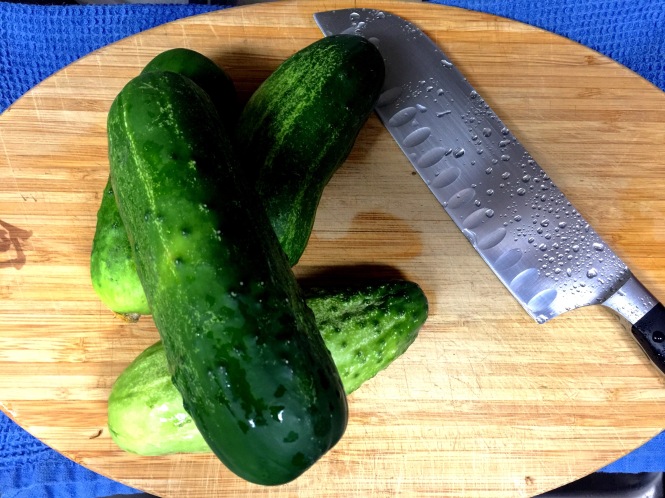 Lesson Learned 1 – Make the cucumber slices of equal thickness: Best to use a mandolin slicer for this job. I set my slicer to 3/16 of an inch (use whatever setting you have that is close to 1/4 inch) and all the slices came out perfectly proportioned. Of course you can use a knife and if some of the slices are not the same thickness it won’t harm the process but I think this is a perfect thickness for the pickle slices. They’re pretty much the same size as you buy in jars at the store. And as I like to always remind you, be very careful using a mandolin slicer and use the finger protector so you still have them once you’re done slicing!

Lesson Learned 2 – Pack the jars as firmly as you can without crushing the slices: You want all the slices to be able to soak up the pickling brine and once you add the brine they will tend to separate from each other a little. Four cucumber pickles, medium sized, for two pint jars should be sufficient for what you need to have the pickles layered firmly in the jar and still be able to close the lid. 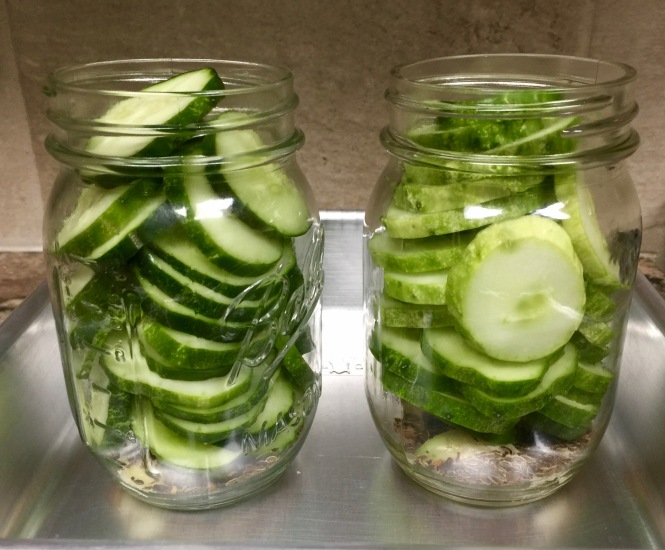 Pack the jars tightly without crushing the slices

Lesson Learned 3 – Once the jars are filled and sealed turn them over a couple of times: I like to see that the pickling spices are sitting throughout the jar and not just stuck on the bottom. I’ve not read anywhere that you have to do that, but I think it creates better all around pickling.

Lesson Learned 4 – Leave the refrigerated jars of pickles alone for at least 48 hours: I know you will be tempted to see what they taste like long before that, but you want to give the pickling spices and brine plenty of time to get acquainted with the cucumber slices. And if you can leave them alone for 72, well that’s even better. Believe me, it’ll be worth the wait.

Other than measuring out the spices and boiling the vinegar water and salt, that’s basically it. It couldn’t be easier and you control the ingredients. So much better than buying jars at the store.

You will need two wide-mouth mason jars with lids for this recipe. Make sure the jars and lids are clean.

Wash and dry the cucumbers. Make sure any blossoms or remnants of blossoms are removed. Cut the cucumbers into 3/16 inch coins. Divide the garlic, dill seed and red pepper flakes in half. Put equal amounts into the bottom of each jar. Pack the cucumbers into the jars as much as you can without crushing any of them and so the lid of the jar can be closed and sealed.

Bring the pickling brine (apple cider vinegar, water and salt) to a rolling ball, whisking it until the salt is incorporated into the liquid.

Pour the hot liquid into the jars, filling each to about 1/2 inch from the top. (I found I used all the brine but depending how you pack your pickles you may not use all of it). Gently tap the jars on the side to remove any air pockets and add more brine if necessary. 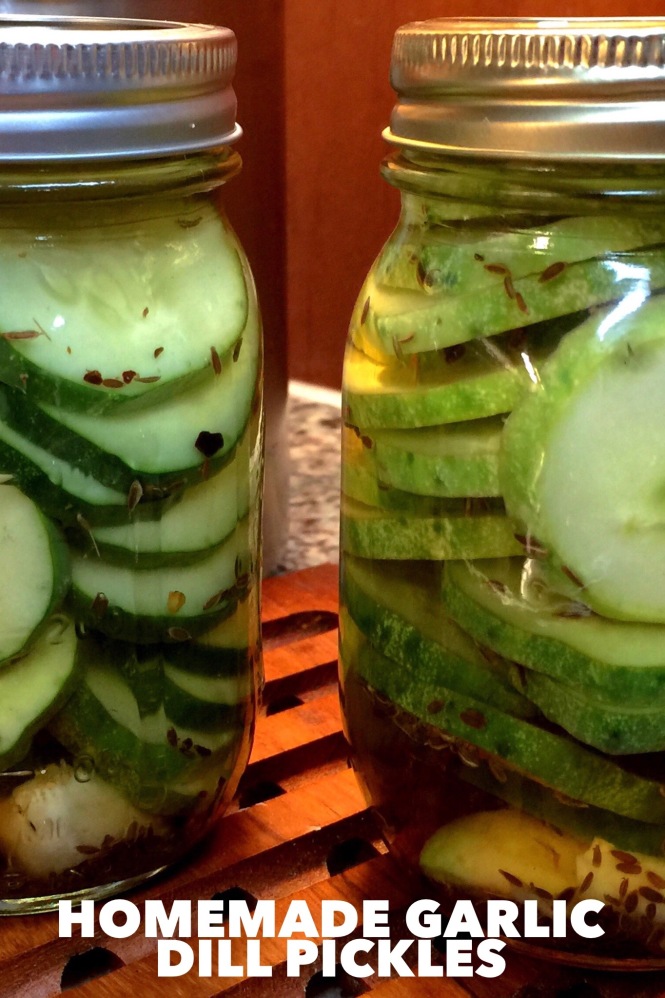 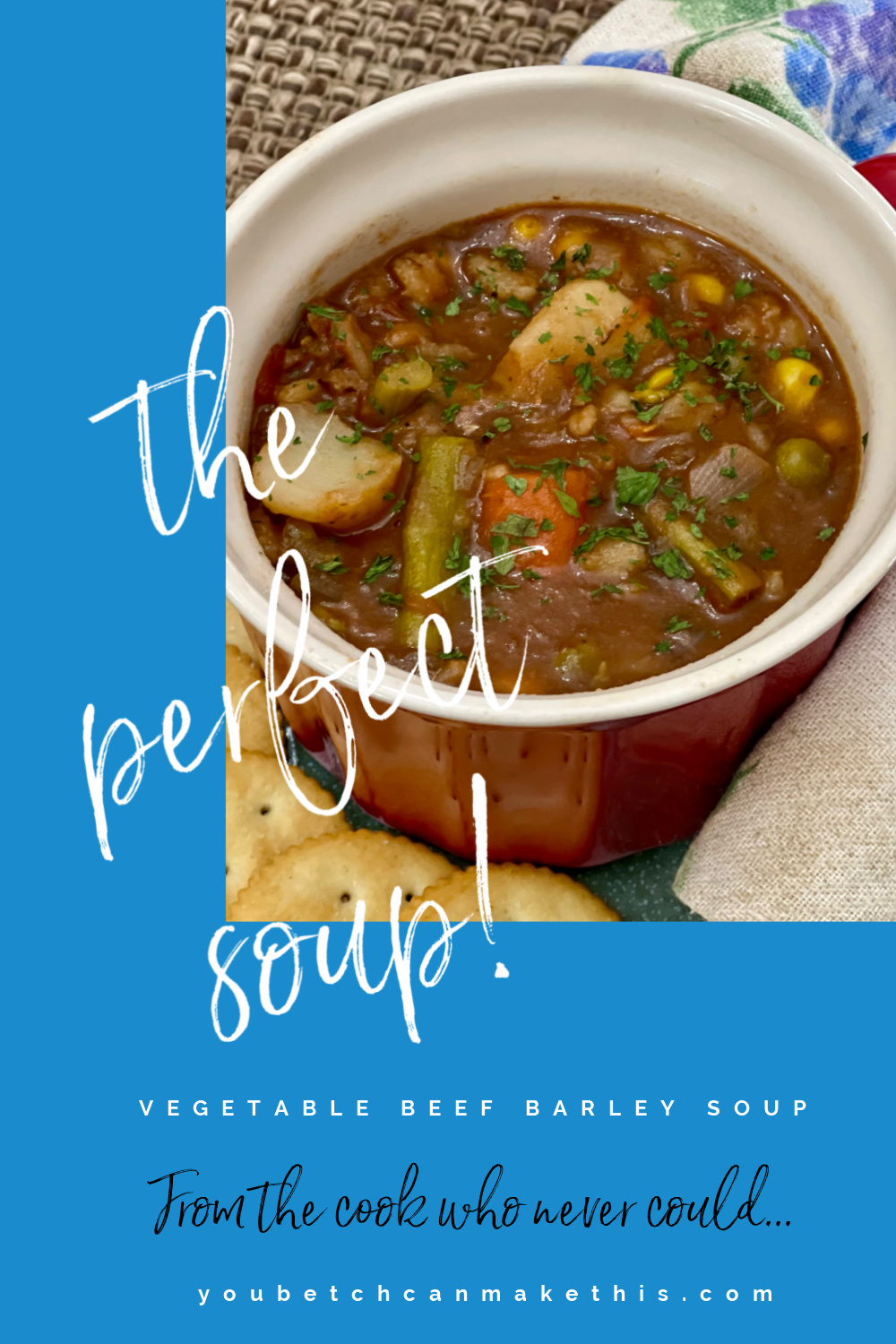 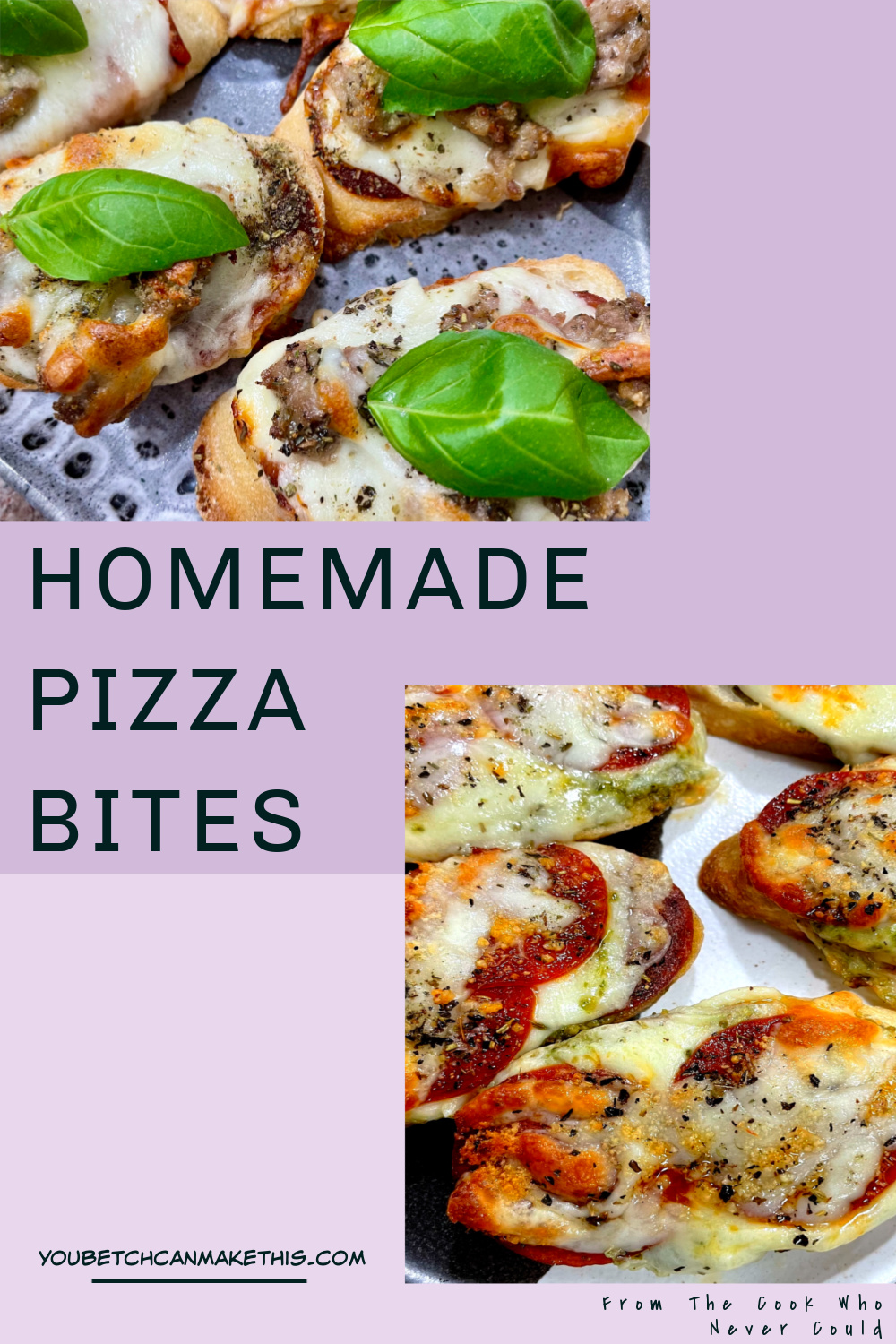