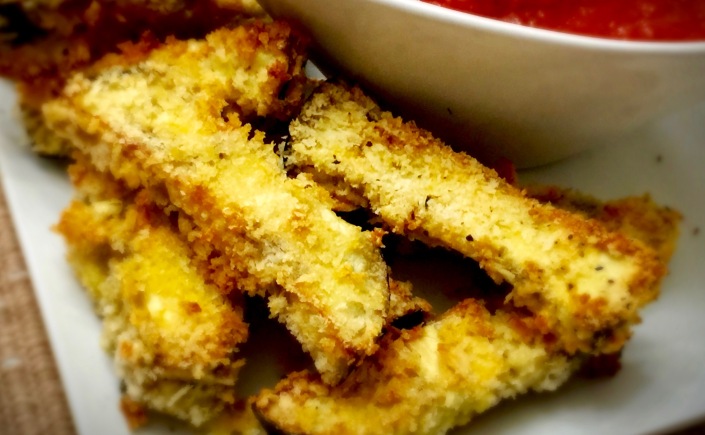 I have to admit I’ve not cooked a lot of eggplant over the years. If memory serves me right I think I may have dabbled into making eggplant parmesan once but the result was less than memorable. But I happened to be at the market the other day and they had the most gorgeous display of eggplant I’ve seen in a long time. All black and shiny and firm. I couldn’t resist getting one. And I vowed I would not let it spoil in my vegetable bin but do something that would make me want to have eggplant again. And boy did I ever!

I decided to make eggplant fries, but by baking them in the oven versus frying them in oil. I was really jumping into the deep end of the pool on this one as I’d never attempted something like this before with eggplant. But I thought, what the heck – what do I have to lose, right? Now in retrospect I am so glad I did because I guarantee you I will make these often. They are s-o-o-o-o good!

The picture above shows you the amount of 1 inch rounds you get from a small-medium sized eggplant. It is very important to salt both sides of the rounds and then let them rest. The salt will “sweat” out the eggplant and remove any bitterness. After 20-30 minutes you will be surprised at how much clear liquid is on each slice. Wipe them off with a paper towel and you are ready to go.

Lesson Learned 2 – Cutting the fries. It’s hard to believe but the rounds pictured above produced close to 40 fries. The secret is to first cut about 4 per each round. Then because the rounds are so thick you take each “fry” turn it on its side and vertically cut it once again. That gives you 8 fries per round. I also trimmed some of the skin off on the fries that were cut from the end of the rounds. A small-medium sized eggplant can easily serve 4 people. 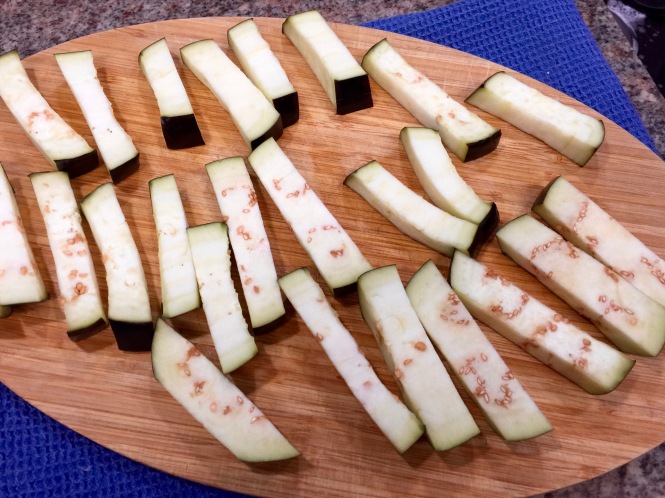 Lesson Learned 3 – The secret to dredging. This recipe calls for a traditional dredging station consisting of flour, beaten eggs and bread crumbs. What I’ve found is the most important way to ensure a nice coating on your eggplant is to make sure you don’t over-flour them. The eggplant has a degree of moisture that will automatically allow the flour to cling to it. Once you dredge the fries in the flour, tap them lightly against the palm of your hand to remove any access or areas that have too much flour. I’ve found if an area has too much flour the egg wash does not cling to it. With the nice light dusting of flour, the egg clings beautifully which then makes the bread crumbs adhere well to the fries. 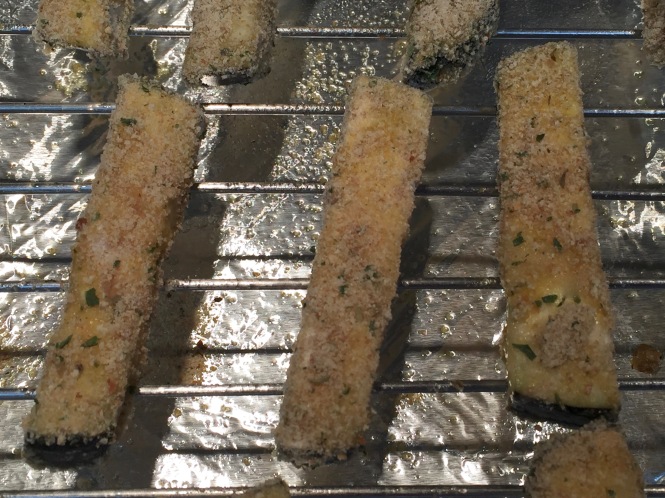 Lesson Learned 4 – Set up a sheet pan with a wire rack for the fries: This can be a messy recipe so I advise that you line your sheet pan with foil before you put the wire rack on top of it. That way any baked on drippings will be easy to clean up. And make sure you spray the wire rack with olive oil cooking spray before placing the fries on the rack. You don’t want them to stick.

That’s it! The rest of the work is done by the oven. These fries come out crispy and flavorful. Pair them up with some Tzatziki or warm marinara sauce and your tastebuds will think they’ve died and gone to heaven. Enjoy this one – it’s a keeper!

A pinch of salt and pepper

Slice the eggplant into 1 inch rounds. Sprinkle both sides of the rounds with salt and set aside on a paper towel for about 20-30 minutes. Cover a 9 x 13 baking sheet with foil. Put a wire rack on top and set aside.

Pat the eggplant rounds dry. Slice each round into 4 slices. Turn each slice on its slide and slice in half vertically.

Serve plain or with the sauce of your choice.