I remember when I was a kid, my father used to like to drive around the “old neighborhood”. My dad grew up on Hermitage Ave. on the South Side of Chicago and every now and then he would take me for a drive and show me the house where he grew up and talk about those days, what it was like to live in that neighborhood and what had changed since he was a kid. At the time I did not understand why he liked to do that, but I certainly get it now. 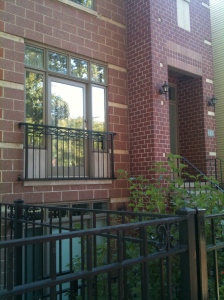 The new house on Oakdale

One of the first things my husband and I did when we got to Chicago was to check out the “old neighborhoods”.  As a matter of fact, we went there immediately after we landed. For over 20 years we lived in the Lake View Area near Diversey and Southport streets. We wound up owning three building right in a row on Oakdale Ave. and when I accepted the position of Director of Parks and Recreation for the city of Dayton, Ohio, we sold the buildings and moved – never to live in Chicago again.

We sold to a local developer and we knew the buildings would be torn down. Two of the three were. One was just upgraded as the property had a coach house in the back and with new zoning laws the coach house could not be reconstructed if it were torn down. We were amazed at how big the trees in our neighborhood had gotten – so big that they created a huge canopy of shade over the street just like how I remembered side streets looked when I was a little girl. At that time the side streets were lined with tall stately Elm trees that died off tragically when Dutch Elm Disease struck the city.

Years ago, our old neighborhood was an old German stronghold changing to mostly Hispanic and then gentrifying bringing in the urban professionals. The old German Restaurant on the corner is now gone and in its place a parking lot for the church across the street. All of our old neighbors are now gone, some have died and some just moved away. The old “greasy spoon” restaurant was still on the corner and although old George who owns the place no longer works there on a daily basis, his son now runs the place. Nothing much else was left of our 20 years in that neighborhood but memories of they way things used to be. 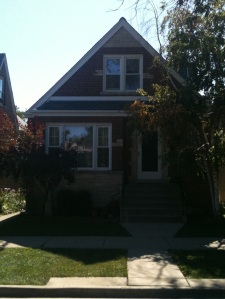 Then we went to my husband’s old childhood neighborhood on the Northwest Side. He lived on Liano Avenue not to far from St Cornelius Church and School. The little single family housed five children and although small by today’s standards, it represented the American Dream of owning your own home and living in a good neighborhood. As we drove down the street my husband pointed out the houses of all of his old grammar schools buddies and talked about playing baseball on the street and coming home when the street lights came on. He was quick to point out that the dormer that his father had put up on the house was still there and marveled at how small the house looked now. He stopped the car and looked at the house for several minutes before I offered to take a picture of it. Then we drove around his old neighborhood where he was quick to point out the pizza place where he used to work, the tavern (Elaine’s Hide and Seek Polka Lounge) where he tended bar, and we even stopped at old man Paterno’s store – now mostly a bar and pizza joint. Old man Paterno is long gone but his son runs the business and he and my husband gabbed away comfortably as if no time had passed.

I also took a side trip to my old childhood neighborhood. I grew up in an apartment building on the South Side in the Brighton Park neighborhood. We lived on the top floor of the building. Our apartment consisted of a kitchen, 3

bedrooms a bathroom and a living room. Very small by today’s standards and yet I never felt it was small when I was growing up. I remember when my dad bought the house. I was pretty young and the building was relatively new. Now it looked old and in need of some tender loving care. We lived next door to a Catholic School, St. Pancratius. The school is now closed and it was not clear to me how the building was now being used. The other houses on the block looked old, as a matter of fact the whole neighborhood looked old. Years ago there was a small grocery store that was right on the corner of our block. Those small “mom and pop” stores were very popular when I was growing up. They were also very convenient. If you needed a loaf of bread or a gallon a milk it was only a quick walk down the block. I remember my mother quite often sending me for a loaf of Butternut Bread (10 cents) and a half gallon of milk (52 cents). Guess we must have really been going through the milk and bread at that time. The store was being torn down when I went there. It had ceased to be a store many years prior and was converted into some type of residence, but now the actual building was being dismantled. It will be interesting to see what is built in its place.

Crane Company was just down the street from our house. Crane Company was a big trucking company on Kedzie Avenue where my grandfather used to work. It boasted this wonderful clock tower with a huge clock that we could see when we were playing out on our street. My mother would tell us to be home at a certain time on the Crane Clock and I remember watching that clock regularly to make sure I got home at the right time. That clock tower and clock is now gone and in its place is a huge truck yard with warehouses. I loved that clock tower. I thought it would always be there.

And as I visited these old neighborhoods I began to understand why my dad would make trips back to his old neighborhood. These places represent the people and experiences in your life that were foundational. As you get older you begin to wonder whether some of these past experiences really existed or if they were dreams you simply created. To see the bricks and mortar that housed these memories enforces that they were actually real. And although my mom and dad are gone, I could feel their presence when I stood in front of that old house. I could remember the candy store  my parents owned that used to be down in the basement. I remembered the joy of being trusted to walk to the corner store by myself to purchase bread and milk, just like a big girl. I remembered sitting on the front porch and dreaming about the man I would marry. I remembered the blizzard of ’67 and shoveling snow that was up to my waist. Precious, precious memories that took place in that old house.

My married life in the Lake View neighborhood was also a joy. It was a thriving area with great theaters and restaurants. Its where I lived when I had the incredible experiences at Hiawatha Park. It is where I got married. The last of the three homes we lived in had the most fabulous deck and we had huge Fourth of July parties and our famous New Years Day parties. Great memories, precious memories. Visiting these old neighborhoods was like going back to your roots, spending time in the places that shaped you into the person that you are today. Bittersweet in some instances and fabulous in others. It was great to connect with these old places and memories. And although many things have changed, the memories will aways be alive and vivid. But going back to the special places in my life has only served to reinforce that although Colorado is now my home, Chicago will always be my heart!