SINCE ORIGINALLY POSTING THIS RECIPE I’VE BEEN ASKED TO INCLUDE THE RECIPE IN THE BLOG AND I’VE TWEAKED IT SLIGHTLY FROM THE ORIGINAL. SO I WILL REPOST THE BLOG, WITH THE LINK TO THE ORIGINAL RECIPE AS WELL AS A PRINTABLE RECIPE ON THIS BLOG:

I stumbled on this one quite by accident. I was looking for a make-ahead appetizer recipe to bring to a friend’s house. All I could seem to find on Pinterest were appetizers best served hot and I wanted something I could make on Friday to bring to an event on Sunday. Somehow I stumbled on this recipe from justapinch.com called crab dip to make ahead. It sounded like it would fit the bill, so I decided to try it.

The challenge for me was finding some good crab meat. The last time I bought lump crab meat was from Costco and it was full of shells and very salty, even after I rinsed it thoroughly. This time I went to a local grocery store called Sprouts and found an 16 oz.can of crabmeat. When I opened it up, much to my surprise, it was a can of crab claw meat. The meat was tender, there were no shells and a slight rinse was all the meat needed. The dip took about 20 minutes to prepare and the recipe says it serves ten but I think it will serve more than that.

My rating of the recipe: A++++. This recipe is fabulous, easy to make and definitely one that tastes better once the flavors have had a chance to meld, so definitely make it ahead of time. This recipe would be a great addition to any holiday gathering.

1. The recipe calls for 1/2 pound or 6 ounces of crab meat. I put in approximately 16 ounces. The more crab the better. There’s nothing worse than a crab dip where you can barely see or taste the crab.

2. The recipe includes adding unflavored gelatin to the mixture, the purpose being to keep the dip from getting too runny once it sits out for a while. I added it and would recommend it. The dip stayed nice and firm and you never taste the gelatin.

4. Everyone who tasted it loved it. You will be asked to share this recipe, I guarantee it.

Quite a few times I talked about the joy of trying a recipe and having it turn out perfectly the first time. This is one of those recipes. I was so excited to bring it with me to my friend’s house. Unfortunately the evening got canceled. My co-workers wound up being the recipients of my culinary success. Already four of them have asked for the recipe.

Cut the cream cheese into smaller chunks. In a medium saucepan combine soup and cream cheese. Stir occasionally until cream cheese has melted. Add gelatin and stir to combine. Stir in the mayonnaise until combined. At no time let the mixture come to a boil.

Once combined, take the mixture off the heat and stir in the onions and celery. Add the crab meat and fold in gently until combined.

But crab mixture into a bowl and refrigerate for at least 6 hours (overnight is best). Put in a serving bowl and garnish with a sprinkle of Old Bay and a lemon slice. Serve with cocktail pumpernickel slices or cracker. 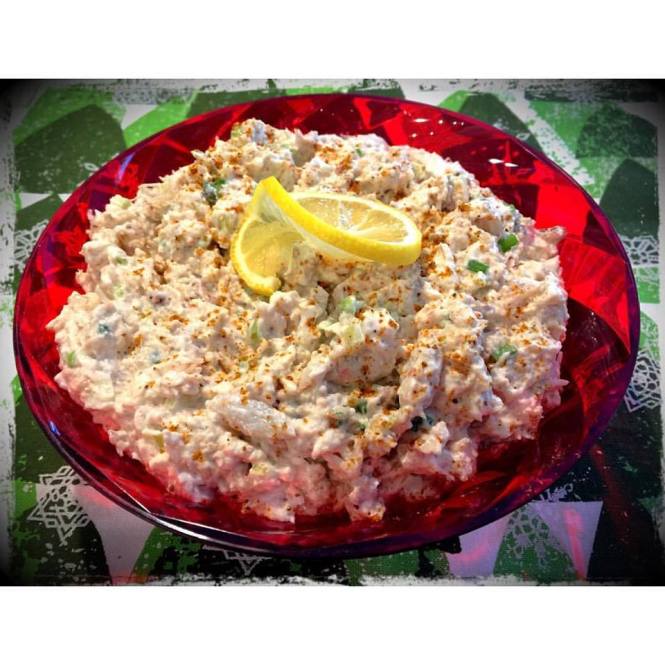 4 thoughts on “Get Your Holiday Crab On…”