Let’s face it. Once the football season is over there is definitely a sports vacuum. Major league baseball is just starting to tune up at spring training, college basketball still has over a month before the NCAA tournament, the next major in tennis is not until May, and everything else just seems to be a bunch of noise. And during this time I think back to some of the major highlights of recent sporting events. In my mind, nothing can surpass what the Chicago Cubs did last year but this past Super Bowl was no slouch of a game either. Then I started thinking about my Super Bowl party this past year and what I served and I thought, wow, I never posted this recipe!

This recipe was so much fun. I wanted what I served to be easy and fun and allow me to spend time with my guests and not in the kitchen. I decided to serve this dip along with a hot crab dip for appetizers. Dinner consisted of slow cooker bbq pulled chicken sandwiches with cole slaw  and sliced tomatoes. The meal was a hit and this appetizer was the star of the show!

Lesson Learned 1 – If you want to impress your guests, make this appetizer: This recipe couldn’t be any easier and boy does it impress. You basically combine the ingredients in stages in the food processor, put it in the carved-out bread bowl, bake it and the oven does all the rest. I was amazed at how great it looks and above and beyond that, it is absolutely delicious. It is a fabulous appetizer to serve at any party!

Lesson Learned 2 – Take your time when carving out the bread bowl: I used an artisan sour dough bread that I bought at the grocery store. You start out by cutting the opening on top of the bread. Make it large enough so you can stuff the bread but not too large that you cut off a lot of the bread. Then take a paring knife and begin cutting out the inside and under the sides. Take your time so that you don’t cut to close to the crust on any side. You want at least about 1 inch of bread at the bottom. You can do a little less than that on the sides. And make sure you save what you cut out. You can cut that into cubes and serve it as one of the sides with the warm dip. Yum! 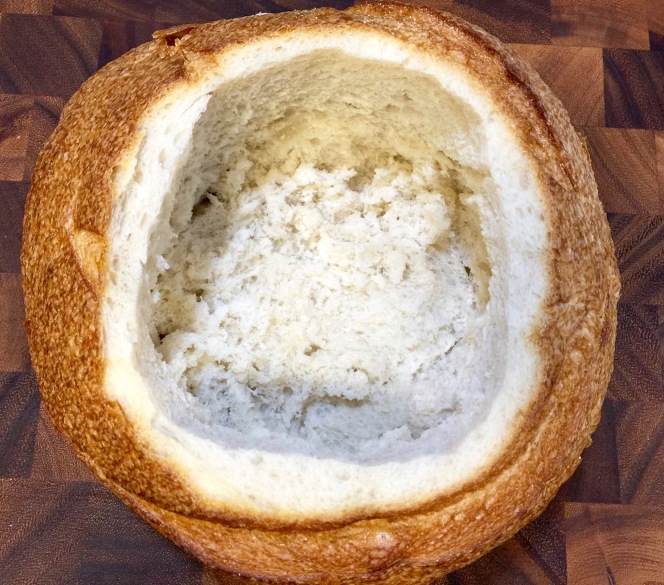 The correct consistency for the dip

Lesson Learned 3 – Garnish is your best kept secret: Are you always looking for ways to make your dish look more professional? Well look no further. Let garnish be your best friend. This appetizer baked in a bread bowl is pretty impressive on its own but what set the presentation over the top was cutting up some flat leaf parsley and garnishing the bread bowl and the accompaniments with the parsley once they were on the platter. You could also dice up some jalapeños and sprinkle them on top of the dip. Since I actually included them in the dip I chose not to use them as a garnish this time. But diced jalapeños are also an option. Garnish tends to make the colors in your food pop and in general makes every dish look more professional. So don’t forget the garnish.

Lesson Learned 4 – Did you ever hear of a Daikon? When looking at things I could serve with this dip, one recipe that I saw suggested daikon. I had never heard of daikon before. I googled it and found out that is part of the radish family. I’d never seen it at the store and so I thought if any store would have it, Whole Foods would. Well I was right. Whole Foods had it. Daikon sort of looks somewhat like a white carrot but they are not parsnips. Anyhow, they are a great side for this dip. Just cut them in rounds like you would a radish. And after I found them at Whole Foods I also found them at my local supermarket, so just look for them and try them.

Make this appetizer for your next party. I guarantee you it will be a hit! Enjoy.

1 10 ounce box of frozen spinach, thawed and squeezed dry in a towel

Preheat the oven to 400 degrees. Cut a thin slice from the top of the bread. With a paring knife cut out the exposed inside to about 1 inch from the bottom and at least 1/2 inch from the sides. Cut the extracted bread into cubes and use for serving later.

Combine the cream cheese, mayo, sour cream, chopped jalapeños and garlic in the food processor and process until smooth. Add the spinach and artichokes and pulse until chunky. Add the parsley, all but 1 Tbs. of the red pepper, 1 1/4 cup cheese and salt and pepper and pulse until just combined.

Spoon the mixture into the bread bowl. Top with the remaining cheese and red pepper. Place the bread on a baking sheet. Brush the bread with olive oil. Bake 25-30 minutes. 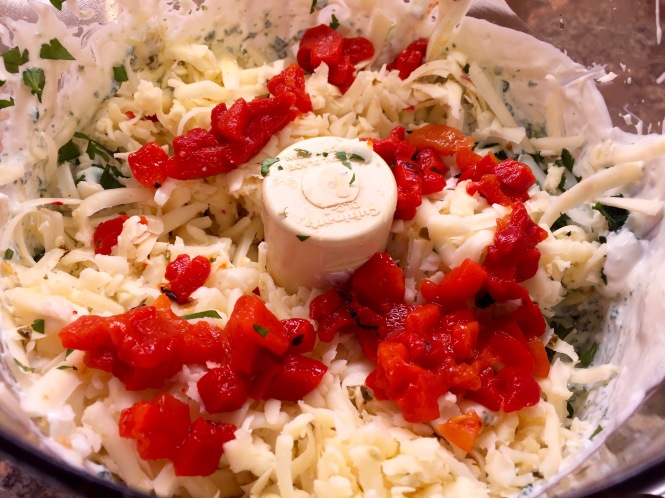 Pulse for a chunky consistency

The correct consistency of the dip

Spoon into the bread bowl. Brush the bread with olive oil. 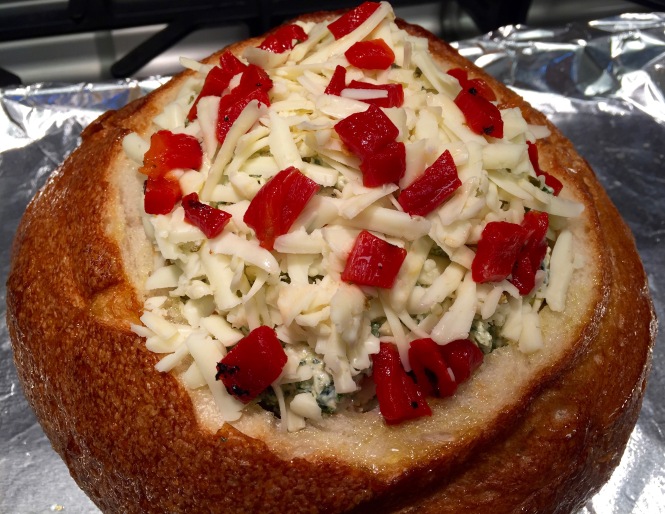